EVE Online and the EVE logo are the registered trademarks of CCP hf. All rights are reserved worldwide. All other trademarks are the property of their respective owners. EVE Online, the EVE logo, EVE and all associated logos and designs are the intellectual property of CCP hf. All artwork, screenshots, characters, vehicles, storylines, world facts or other recognizable features of the intellectual property relating to these trademarks are likewise the intellectual property of CCP hf. CCP hf. has granted permission to Ithica Hawk to use EVE Online and all associated logos and designs for promotional and information purposes on its website but does not endorse, and is not in any way affiliated with, Ithica Hawk. CCP is in no way responsible for the content on or functioning of this website, nor can it be liable for any damage arising from the use of this website.

After yesterdays abject failure at solo wormhole hunting I decided to scrap doing it in a Manticore and reship to a Tengu. My new home had a LS static that was only 8j from Dodixie so I hoped out and burned up to get myself a lovely new ship. 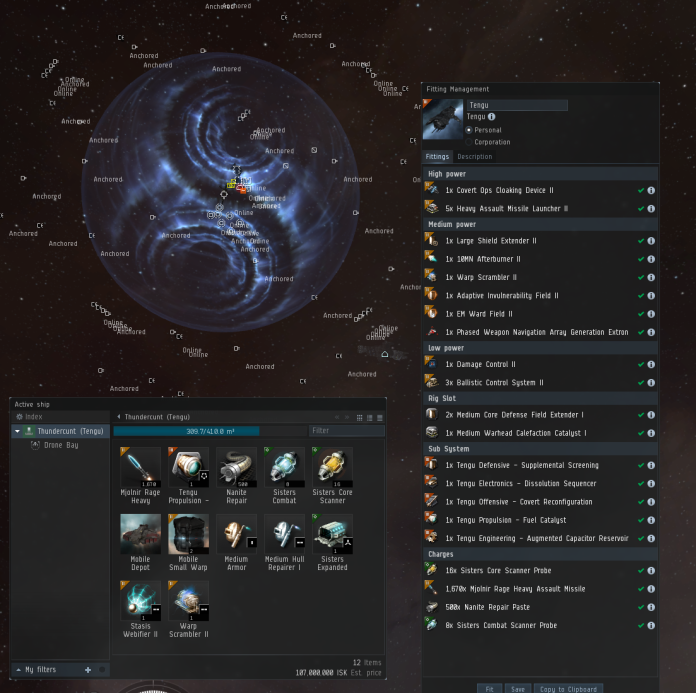 A decent cloaky combat fit, it puts out around 450dps with an alright tank. It’s not going to beat a pure PvP Tengu but considering I’ll mainly be going for the weak and helpless that’s ok. I’d prefer a MWD but it required gimping the fit more than I’d like. I’m not the best at T3 fittings. In fact, I suck at it.
I also brought some refit modules in the cargo to allow me to live in wormholes as long as I’d like: hull and armor reps to fix myself up if shit goes a little too wrong; an inderdiction nullifer subsystem for moving around without worrying about bubbles; an expanded probe launcher for scanning; extra scram for catching stabbed PI haulers; web for funsies; mobile depot for refitting all this; two small T2 bubbles for setting up traps.

Excellent. Stuff purchased I slinked back into the wormhole. It seemed my new buddies were all offline or not doing anything now so I scanned down the new sites, safe’d up and logged off.

This morning I logged in shortly after downtime, scanned down all the new sites and wormholes that had spawned, bookmarked it all and went to watch my friends in their POS. They continued yesterdays game of jumping ship to ship without doing much. I put Eve on my second screen and went about my business with other things.

Morgan Karaka was the procurer I tried to hit yesterday. He started moving around in his Myrmidon. I missed him warp off the first time as I wasn’t paying attention. When I found him in a site and warped in he was gone and back at the POS. I watched him sit for a while before warping back to the site. I followed again.

Oh hey there friend. Not sure of his skills I decided to wait for him to kill some rats first to take the pressure off should they swap to me after I agressed. After killing a few he warped back to the POS. I followed once again wondering what he was doing. It was only when I watched him, this time, land 200km away from his POS, eject, get an Exequror and warp down to rep it I realised he was struggling to tank the site. I was tempted to try stash my Tengu in the lowsec and warp my pod in to steal the Myrm but killing it would be so much more fun. This cycle repeated a few times. He’d warp in and a random range and I’d follow, trying to get within 10 or so km before uncloaking. As I’d get close he’d warp off to repair. Eventually a Vexor came in with him but had only T1 hobgoblins out so I wasn’t too concerned.

I managed to get within 10km and at 7km I clicked my cloak. Literally as I did this he warped off. Through an incredible stroke of luck it had happened at just the right time that I hadn’t actually lifted my finger off my mouse button. I dragged my cloak to a different slot instead.

The classic ‘warp-back-to-pos-rep-self-with-other-ship’ maneuver took place while I stubbornly waited in the site for him to come back. Watching the Vexor do his thing. Sure enough he came back but 80km from me. I started burning up toward him. I got to 20km before he warped off. I stayed again but this time the site despawned around me. God damn it. I bookmarked a central wreck and warped to their POS. They repaired both ships then warped back to the site, probably to loot. This time I landed only 20km from them. Excellent. I started burning for the Myrmidon, my white whale.

Glorious success. Two scrams because I’d spotted a PI hauler at one point so refit to catch that if it came out. I didn’t bother refitting to a web or target painter because battlecruiser. The salvage drones disappeared and combat drones came out. Warrior IIs. When he died I was still ~90% shield. 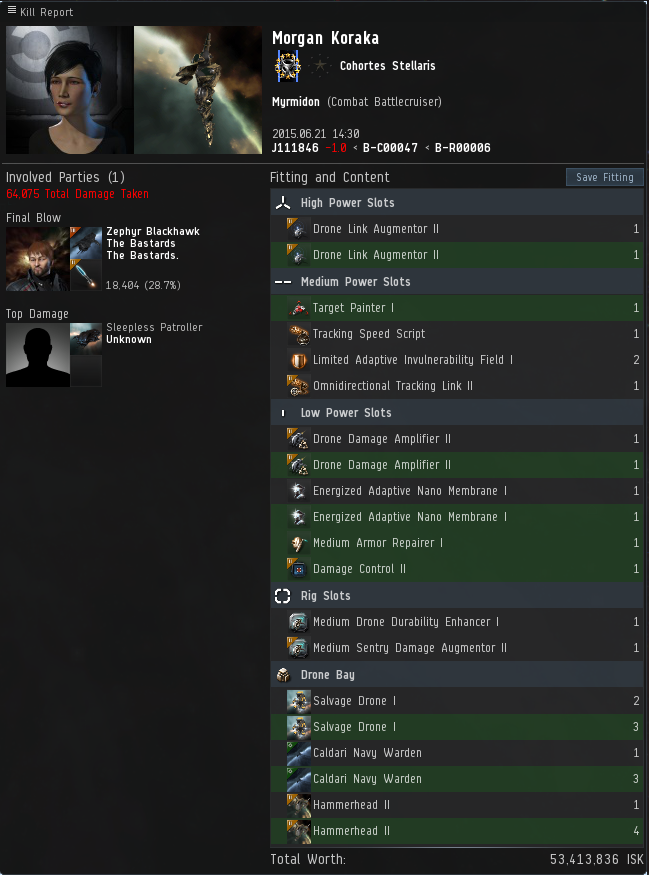 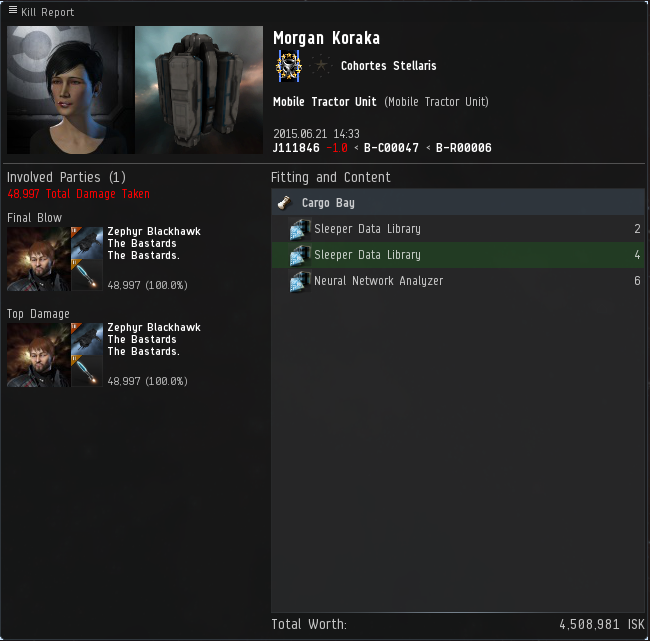 Op success. Shortly after a Pilgrim and Astero appeared on scan but I’ve moved on now. My new friends will be on alert so they’ll probably be cautious running sites now. I’d imagine I’m watchlisted. Goodbye friends. It’s been emotional.